Decided to build the second Totoro papercraft I bought while in Japan this time, the Kusakabe sisters and the Cat Bus. I actually wanted to buy two other Totoro ones - one with the famous bus stop scene when Satsuki first meets Totoro and also the one when the family was moving into their new home.

Unfortunately space is limited so I had to be selective ^^; 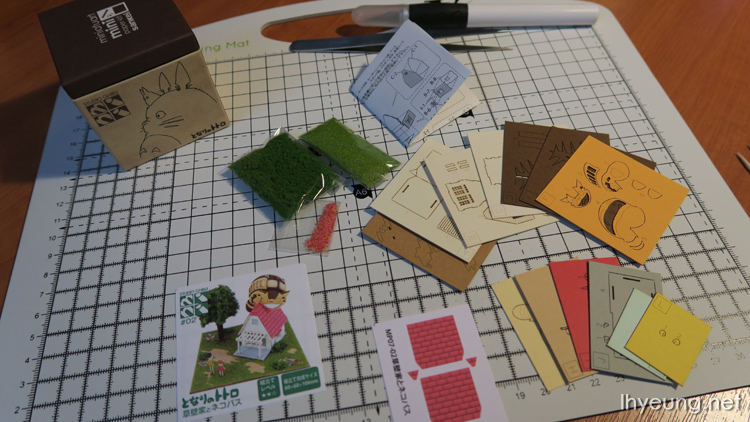 Anyway, interestingly enough this model only has 1 side of instructions even though it's a 2 star difficulty while the others were all 2 sided. That sheet with the parts for the Cat Bus kind of looks like a head and big butt, lol... 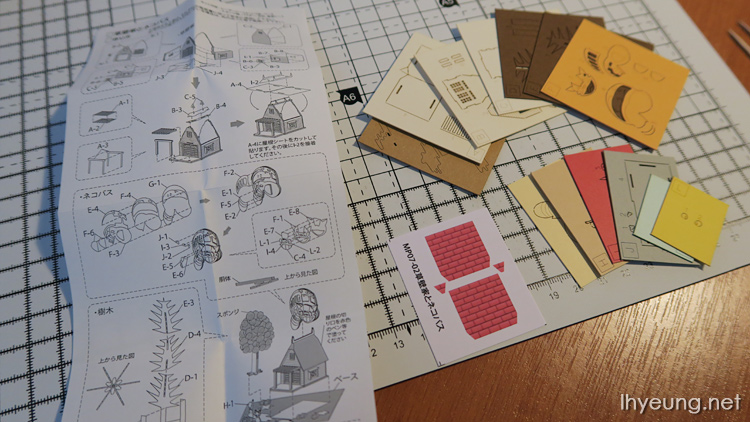 So, house it is first. I don't see why they didn't make the card white really. It's a peach colour instead.

Check out this big piece of card just for the window pane... 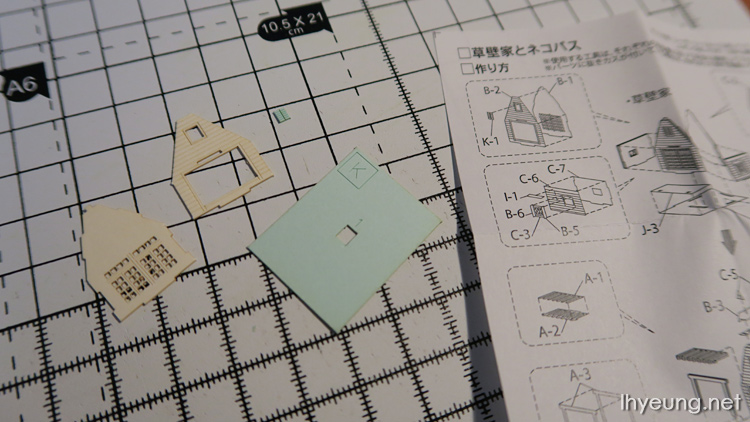 There's always a lot of finely (laser) cut details on tiny parts like these windows that you probably wouldn't notice unless you looked really close at the model. 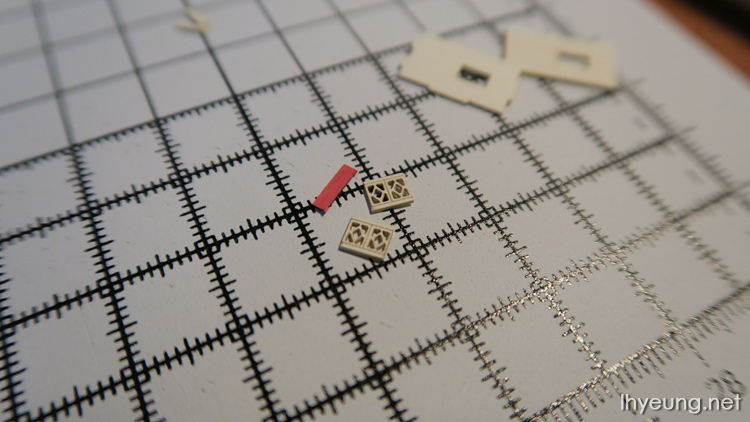 And of course, it also means it takes a lot of patience to put together. These tiny little parts make up the window takes quite a bit of time to put together because they're so small! 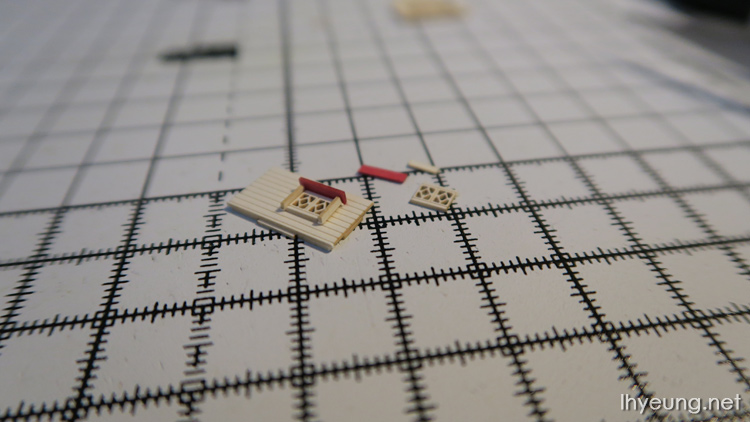 Harder part is probably aligning the walls together of any box-like object because sometimes they can be a bit off. 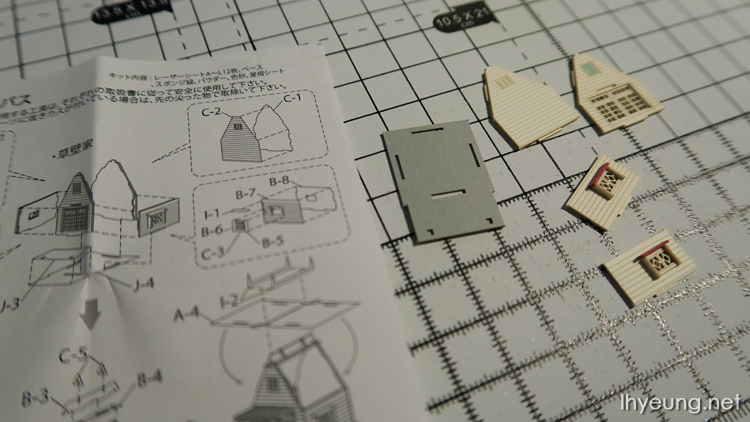 I actually glued one of the walls the wrong way so that made it worse... Since the glue had already settled, all I could do was scrape out the little wedges so that the wall could fit into place. I was wondering why the window hole on the two cards weren't aligned... =/ 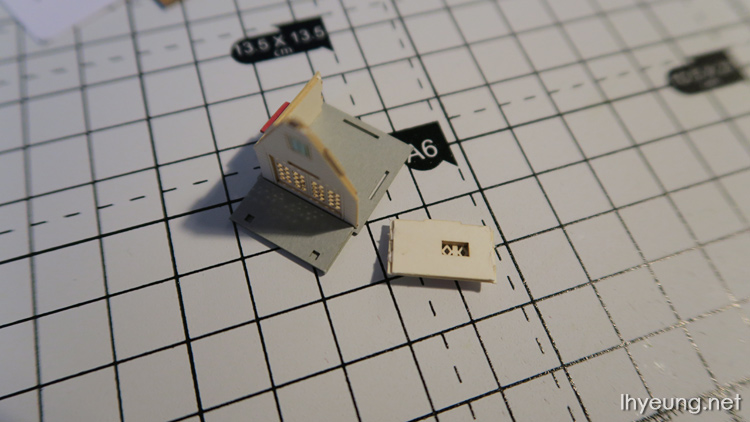 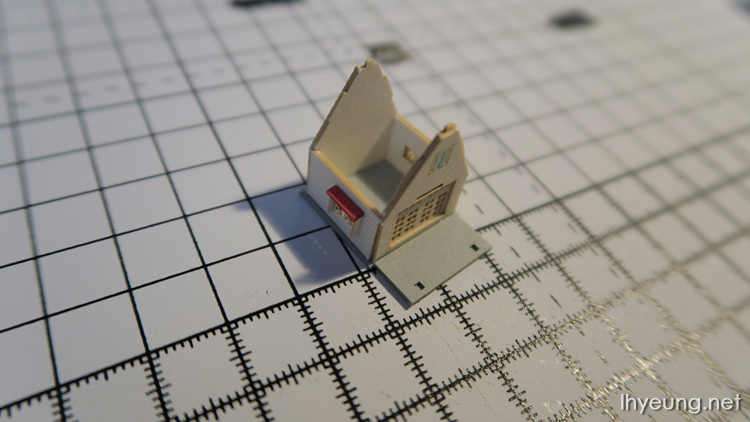 While the house itself is hollow, the roof actually has quite a bit of suspension - the house in the Kiki bakery model didn't but probably because there wasn't a big Cat Bus sitting on top, lol. Putting those tiny triangles in place was quite tricky. 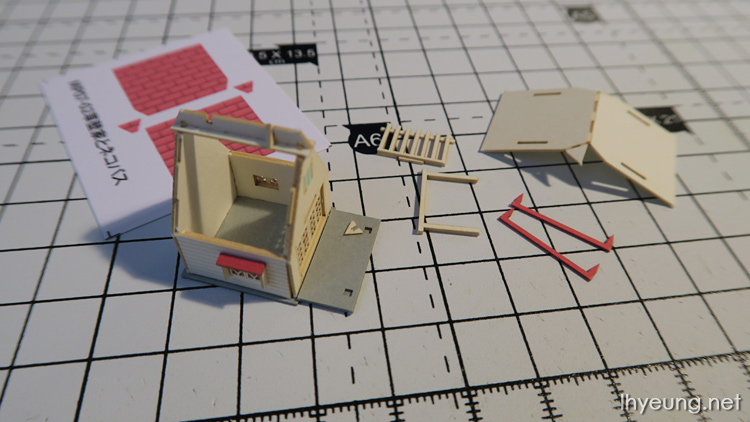 Kusakabe residence looks quite good after putting all the parts together including the roof tiles. 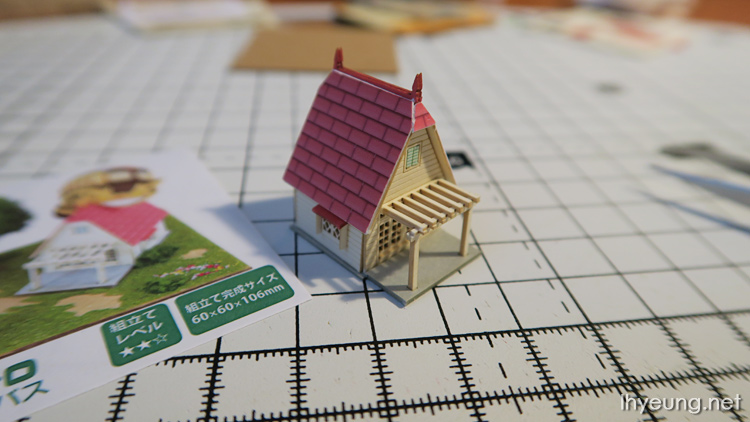 Cat Bus is made up of a lot of pieces too to get that 3D look. 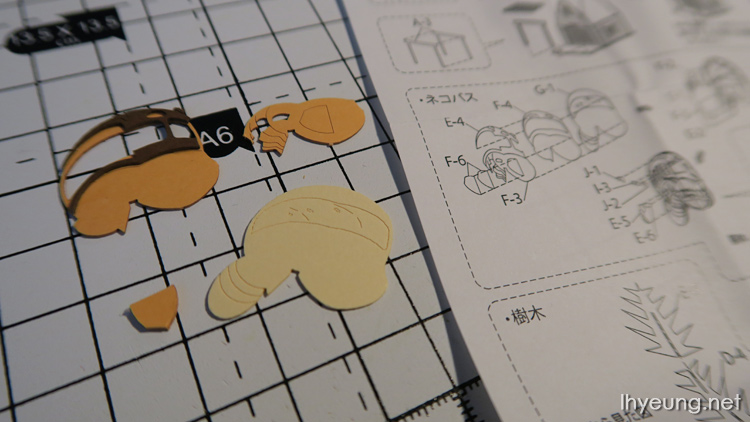 You actually glue on 3 separate parts to make the tail instead of adding colour to it yourself. 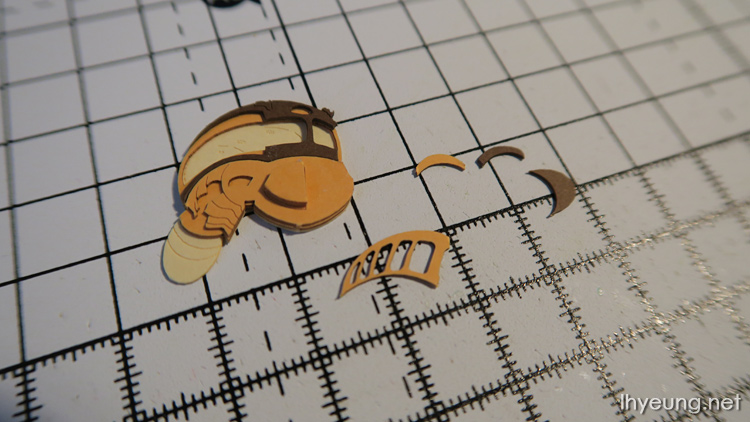 Really has to be a laser to cut out this tiny red "su (spaces)" sign... Along with the little mice. 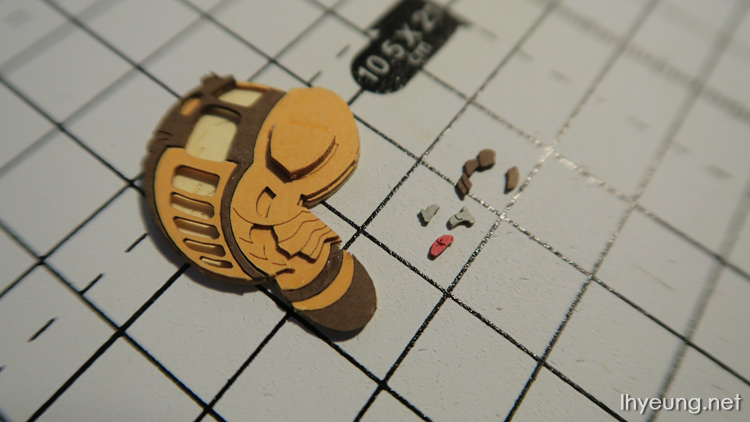 Cat Bus looking quite creepy before it's fully assembled, huh? 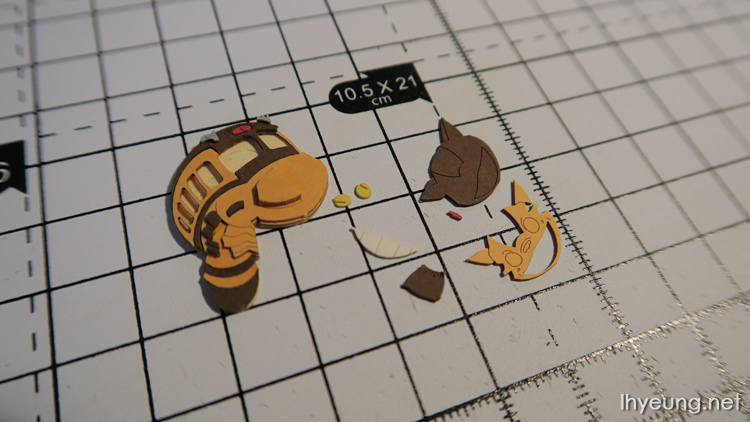 Argh! He's lost his head! Cat Bus actually reminds me of the Cheshire Cat from Alice in Wonderland with that big cheezy grin. 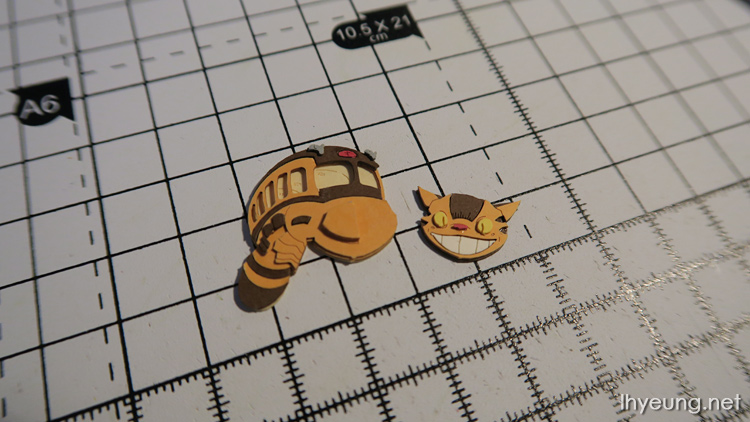 Despite having built trees for two other Sankei Ghibli models now I still don't like building them. Too hard to put the sponge on.

Same for the grass because of how messy the green powder can get but, looks great once it's all done though ^^; 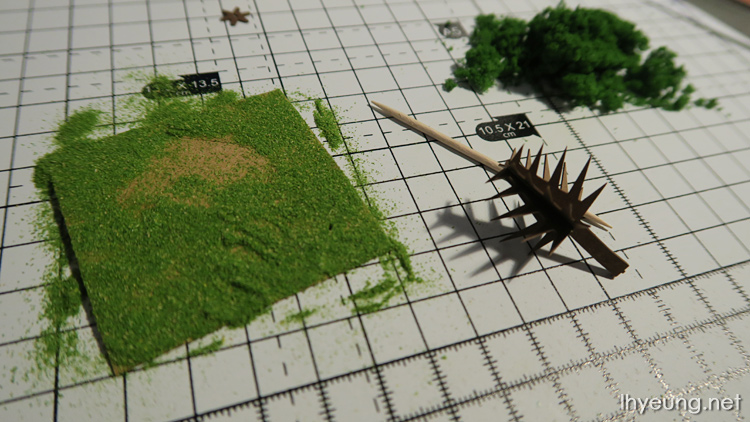 As with the other models, the characters need some colour. 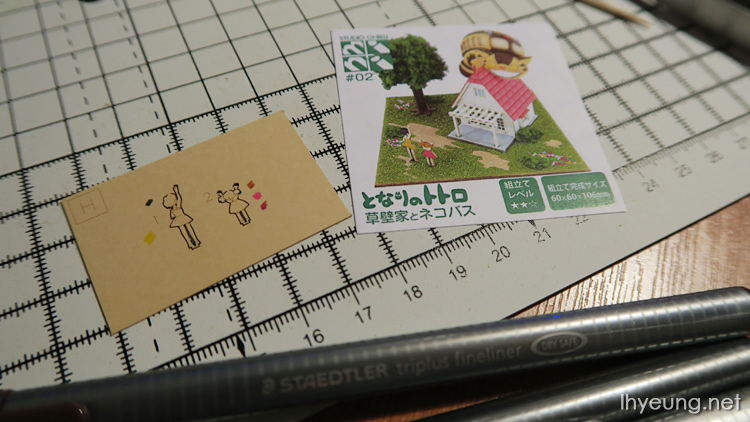 Just for reference, here is the scene from the end of the movie... A true classic. 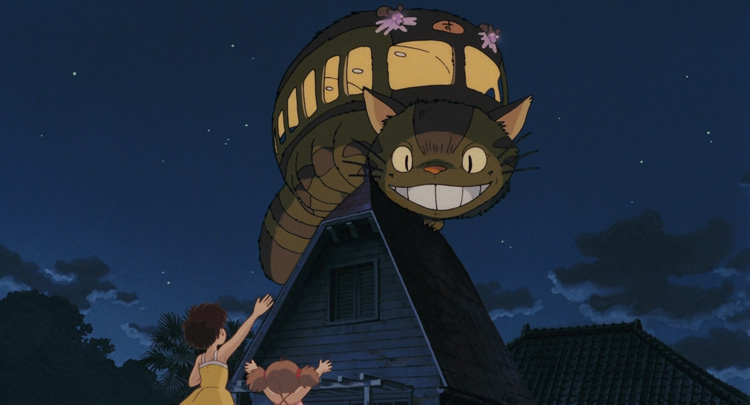 And so the finished model! Actually was quite quick to assemble - only took 6 hours compared to 11 the two star Kiki bakery model took. 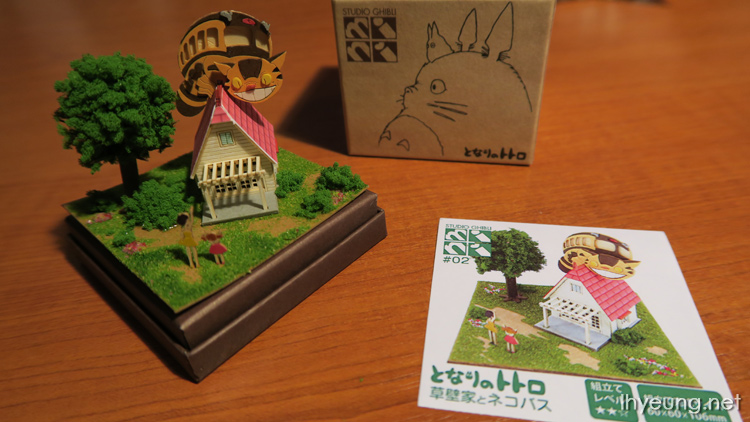 I improvised a bit this time and decided it looked better with more bushes than shown in the photo. Wanted to make the house white but the "metal white ink" I had didn't quite stick... Still, not too bad ^^ 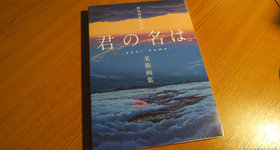 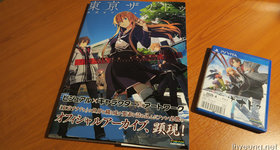 I didn't really enjoy Tokyo Xanadu so it was a good thing I bought it second hand...