I've become such a fan of Steins;Gate's story after playing the game I decided I had to find the "official materials" artbook. Unfortunately, since the book was published for the original Xbox360 game 2 years ago and Huke's artwork is so popular, it seems to be sold out everywhere.

Fortunately, Amazon JP managed to restock the 2300 Yen (US$29) book and although the EMS postage fees make this book close to £40, I decided to go for it anyway. It turns out to be a great read with a very interesting Q&A section that clarifies some points of the story.

Don't read on if you haven't played the game and is still watching the show yet since it contains plenty of visual spoilers! And yes, I know the exposure and white balance is inconsistence in the photos but... They should do for the purpose of this preview ^^; 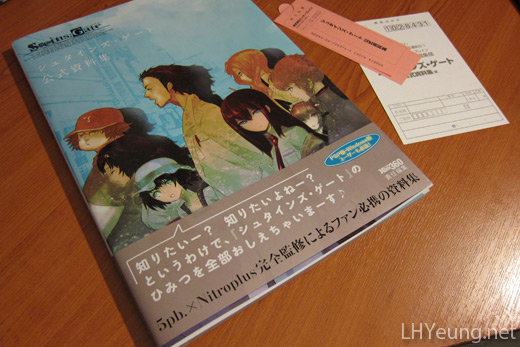 Inside you have a fold-out A3 poster version of the front cover for you to rip out for your walls if you wanted to. 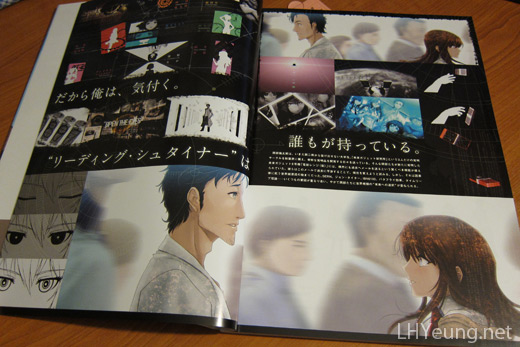 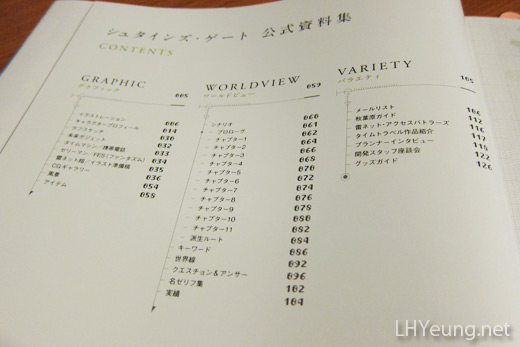 I'll take a preview shot of each section.

So introduction opens up with Huke's (the main artist) illustrations for the game packaging and various magazines including his own Steins;Gate Doujin (self-published works) sold at the Comiket. 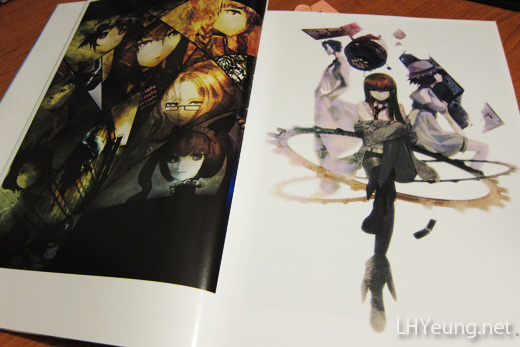 Very comprehensive character profiles complete with rough sketches, all their expressions and Tate-ehs (poses) used in-game. "christina appears to be the most popular so picked her pages for previewing! 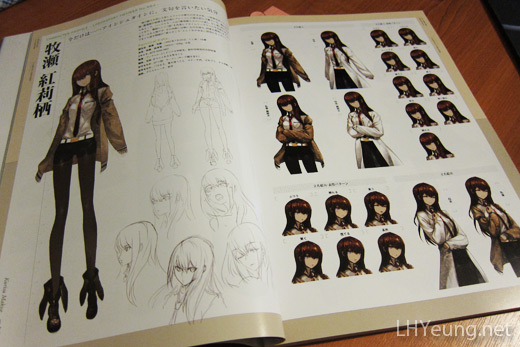 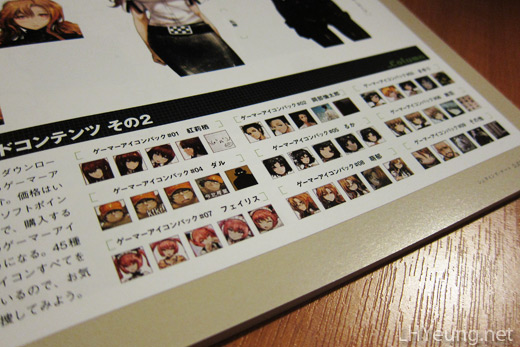 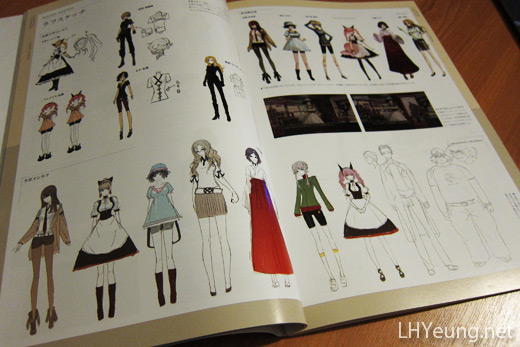 All the Mirai Gadgets including the ones that were never mentioned in the game or show such as Gadget No. 001 - "Bit Atom Gun" which is really just a gun shaped TV remote.

And apparently "clamshell" are still the most popular in Japan with the exception of people using iPhones although Android is starting to break into the market thanks to its customisations. 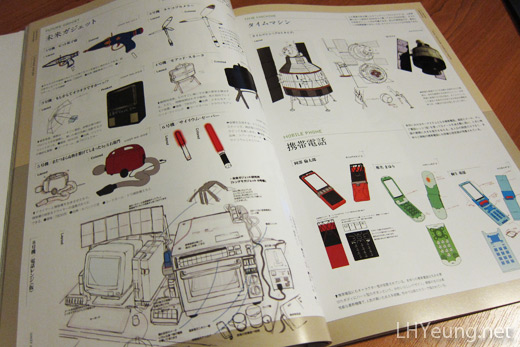 CG Gallery has every event illustration printed from the game. So who cares if you haven't unlocked every one of them in the game? Very comprehensive!

Yes, there is a shower scene amongst them. 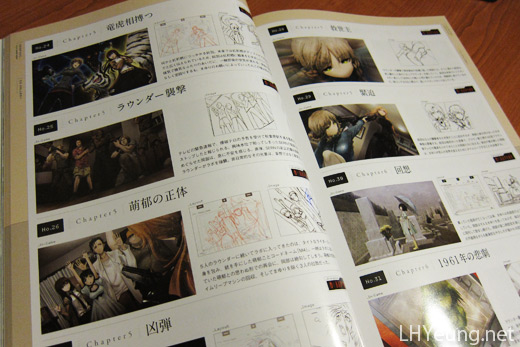 All the background locations from the game. If I had to pick a favourite it would be the Mirai Gadgets Lab. 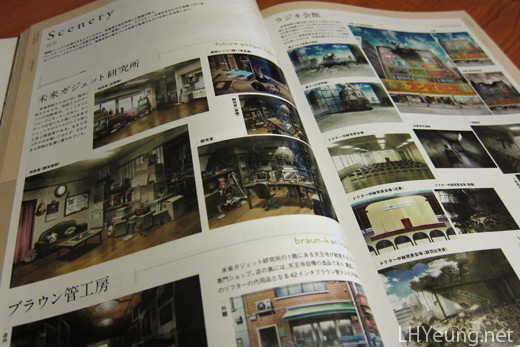 Various items used. Mayuri was going to make Okabe cosplay as Zero from Code Geass! He does sound and act like him...

And the "IBN5100" is real in case you were wondering. The IBN5100 also really did weigh 28kg and was called a "portable computer". Imagine carrying that around instead of netbooks or MacBook Air! 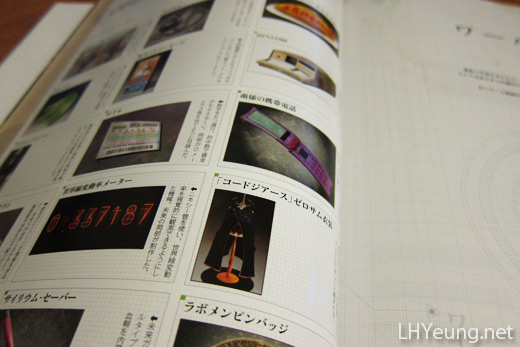 Scenario section has a flowchart telling you how to unlock the different endings.

And this is another thing I like to see in an artbook/fanbook... a full illustrated and detailed of summary of the entire story! 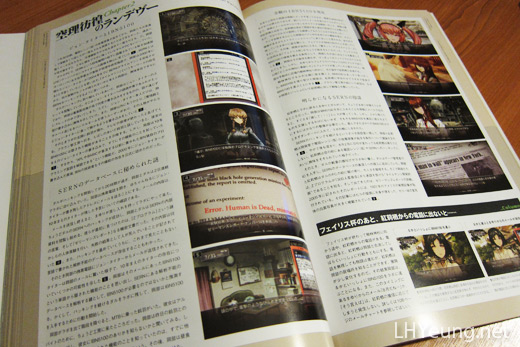 The game had quite a lot of sponsors apparently - Dr. Pepper being one of them. 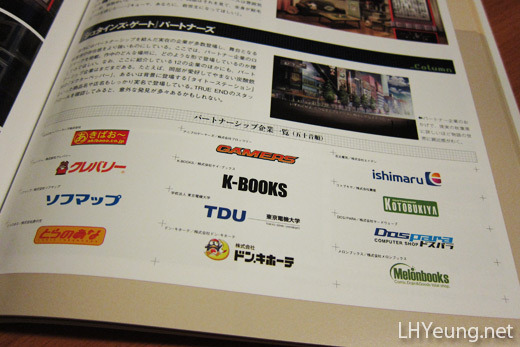 Checkout the different versions of the pinbadge from different timelines. 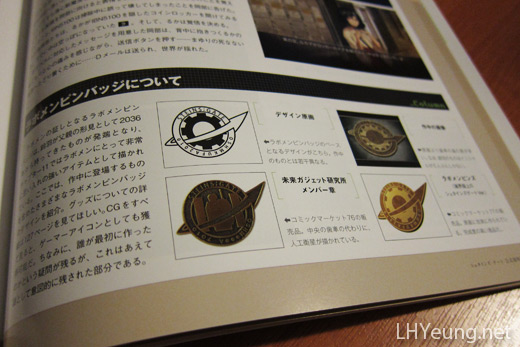 The scenarios section include a summary of the different endings too. 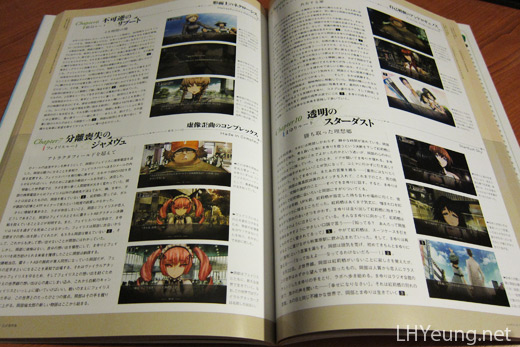 "Keyword" section... in other words, the glossary. There are the 11 different time travel theories that Kurisu went through in detail in the game but didn't in the Anime.

There's also a 12th one which is the fictional time leap system created in the game.

Other than the theories, there are also pages dedicated to the D-Mail system, time leap, attractor field, time machine, SERN, IBN5100, John Titor and The Mirai Gadgets Lab. 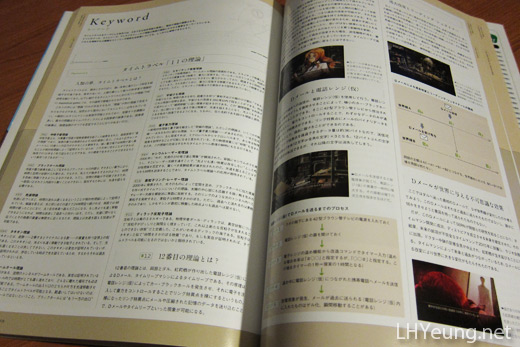 Worldline section is basically chart of what events take place depending on the value of the Divergence Meter. 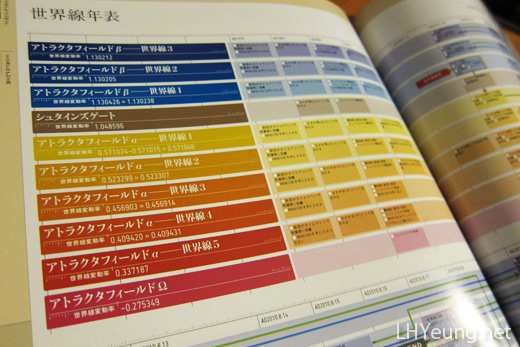 Now the more interesting Q&A section where some of the unanswered questions from the game are cleared up. I've picked out the ones which I think are the most important. Note that these aren't direct translations.

Q2. What part of the game was the introduction - when Okarin was talking about who to save, Mayuri or Kurisu, set?
A. It's some time between chapter 9 and 10 when Future Okarin is upgrading the D-Mail system so that he can send a video to himself in the past.

Q3. What was the significance of Okarin's dream in chapter 3 when Kurisu is talking about the universe?
A. It was to show what happens to people who fall into a black hole. The barren land dream in chapter 5 with Mayuri is the world 7 billion years ago, Okarin being sent there for opposing SERN.

Q4. It seems to be awfully careless of SERN to put their name as markings on their human experiments. Aren't they worried?
A. It makes it easier for them to identify where their test subjects ended at. They can cover up and people wouldn't believe it. 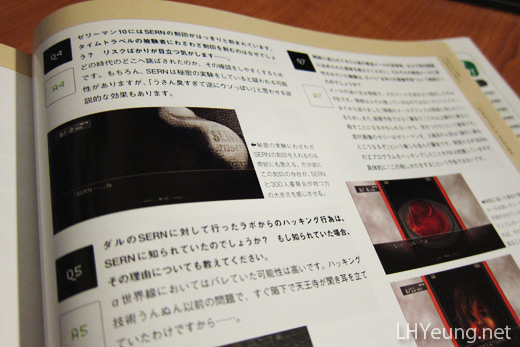 Q7. Who sent those threat e-mails?
A. It was Moeka who sent the photos of the red jelly and mannequin head in them, warning Okarin not to proceed any further.

Q11. Why did Suzuha have to arrange that time conference to find her father?
A. Daru is so skinny when Suzuha is born in the future, she never thought Daru could be her father.

Q14. Why didn't Suzuha keep the IBN5100 herself and left it at the shrine?
A. When she makes a stopover in 2010, she heard Okarin say he found it there in chapter 2 so it was the best place to leave it. It also needed repairs so she passed it onto Feyris' father first. There was the risk SERN would send people after her. In the end she didn't live long until 2010 to retrieve it herself so it was left at the shrine. 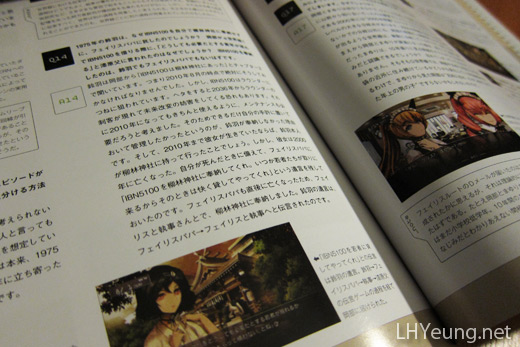 Q20. Does Daru's wife appear at any point in the game?
A. No but Daru meets her at ComiMa. Her name is Amaoto Yuki. She is a fujoshi (into gay love Manga). Unknown if she has big "eyes" ^^;

Q23 If the conservation of time meant Mayuri's fate is fixed, why wasn't Feyris' father fixed too?
A. Due to the big " Millenium Bug" event, it is not pre-determined whether he dies or not in the branching timeline.

Q24 How did Okarin get the "Leading Steiner" ability?
A. It was most likely awakened when he got that terrible fever during his childhood but it is unknown why. It should be linked to Millenium Bug event.

Q25. Here's something that bothered many players... Why did the timeline shift just because they wiped a log entry from the Echelon database?
A. John Titor mentions in one of his @Channel posts that if a significant event is changed at any point on a timeline, history will re-construct itself and thus, changing the events that happens following that point in the timeline which, is what happened in this case. 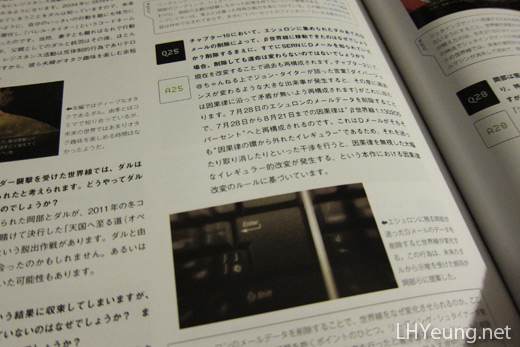 Q29. Why didn't Okarin meet the himself, the himself that traveled back in time the first time, during his second attempt to save Kurisu?
A. Time divergence meant he goes to a different branch of the timeline.

Q30. If Okarin ends up not killing Kurisu and they never met, the time machine shouldn't have been completed. Why was it still completed?
A. It's completed as a result of the conservation of time just like Mayuri's fate. Events still happen one way or another.

Well, it will be interesting if they clarify these points in the second half of the show. 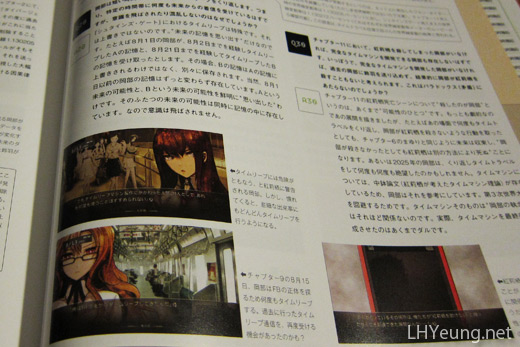 A flowchart guide to beating the game and how you should answer e-mails. As I mentioned before, it really is a gimmicky system. Nothing special about it. 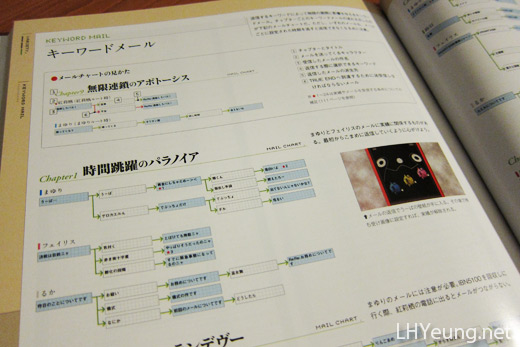 And as with most illustrated Japanese titles, here are photos of the real world locations the game took place in. 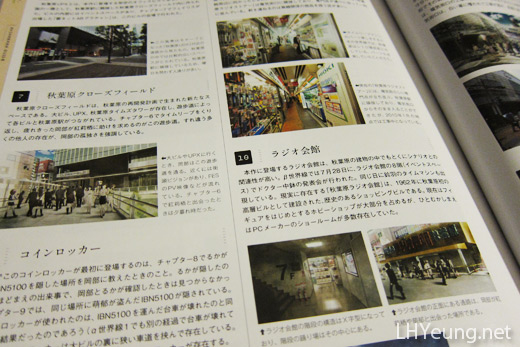 Other time travel fiction you might be interested in... including TokiKake "The Girl Who Leapt Through Time"! That was a great and hilarious movie!

Haven't watched Butterfly Effect yet though although I've been meaning to. 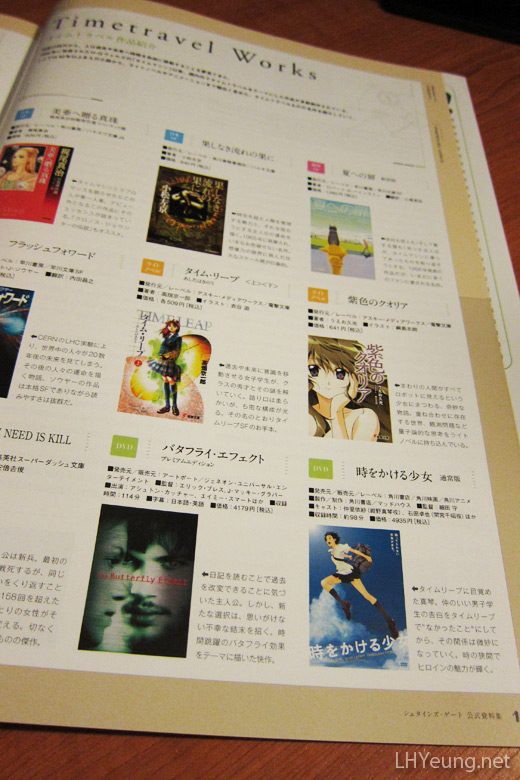 Interviews with the staff such as the Planning Director Chiyomaru Shikura. 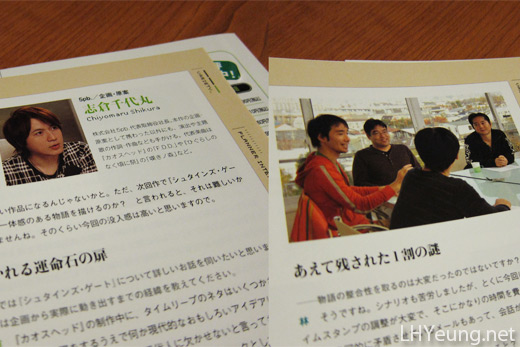 And last but not least, some advertising for the merchandise. Feyris looks a bit spooky here. 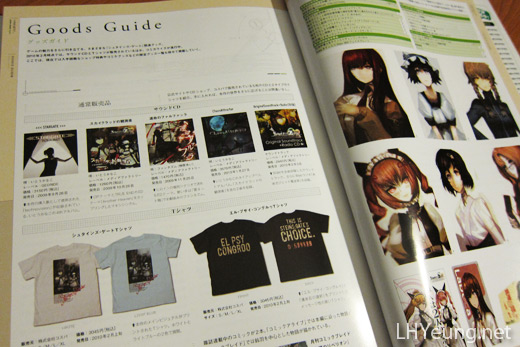 Very satisfied with this book... Definitely much better than the Code Geass "Complete Guide" book I bought a long time ago! Print quality is good and it's very comprehensive. Only gripe I have is that it would have been even better if it was hardback! 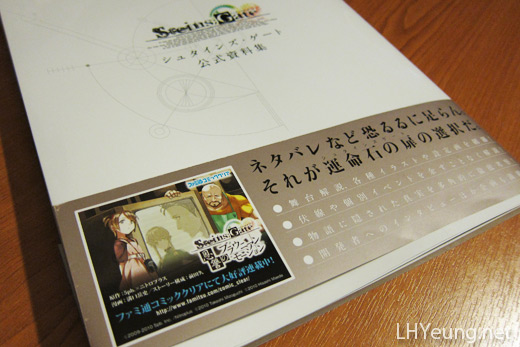 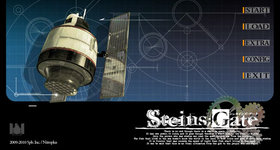 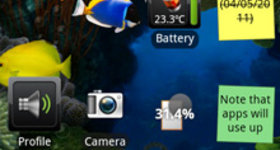 It's been a while since I upgraded to an Android phone and I thought I'd share some of...

29 Sep 2011, 3:30:11 am
I'm still confused with the first D-mail, when Okarin send text message about Kurisu has been stabbed to Daru. If I'm not wrong, SERN monitor every information traffic so probably they read this mail. So..... my guess ther read then prevent this event thus Okarin "moving" into another divergence. Am I wrong interpret as that? This is a bit confusing. I don't own the artbook nor could read kanji. Probably there is more clear information about this. Would you help me clarify this.
Haven't play the VN yet either.

14 Oct 2011, 9:41:43 pm
Psycho. Much more simplier.
The satellite crushed into Radio kaikan building and Nakabachi's conference was canceled, so he couldn't kill Kurisu because he didn't even meet her in there alpha worldline. Tht's why she is alive in alpha and dead in beta.

6 May 2012, 9:48:23 pm
when Okabe send the first D-mail... SERN realize one thing in the beta world (back to the previous unknown time before Makise killed since we don't know how much time is set in phone microwave). They realize that Makise is important person who can develop time machine (not her father like in the beta line), then the world line change to the alpha line which SERN recruit Makise into SERN member in the future of this world line. Then, it's true, Makise become villain in the alpha future (from suzuhara reaction of hate). But, thanks to Okabe's reading steiner who knew Makise from previous world line make her into his nakama. So, I believe in the alpha line future (if Okabe didn't back in beta line), Makise will become resistance member with Okabe. It's just my interpretation from the anime...maybe the artbook told this mystery...