Episode 11 Summary, The Power of Feelings

It was late night now and outside Ashford Academy, a large number of students were gathered worried about the safety of their student council president Milly. Inside, Lelouch had made contact with Milly who jokes that she won't be able to bring back any souvenirs. Rivalz was glad and Shirley was at the edge of tears. As Lelouch hands her a handkerchief, Rollo drags him away. 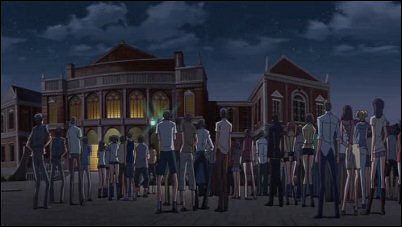 As Shirley gladly made the announcement to everyone that Milly was safe, Rollo was leading the fake Lelouch, Sayoko away into the library complaining that he was being overly kind to everyone and should be careful he doesn't overdo it. Back down in their secret headquarters, Viletta was waiting for them. She gives them an update on the real Lelouch, Zero's situation. The Britannians had joined in the fight and had Zero surrounded. 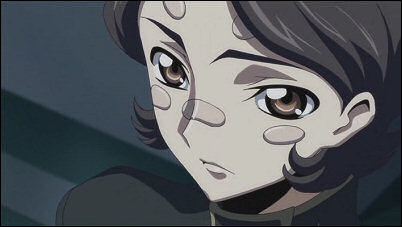 At the mausoleum, Ougi felt they will be safe for the time being with the Tianzi on their hands but, to his surprise the Britannian forces begin their bombing attacks. It appears the Chinese Federation didn't care about their Tianzi any more and were prepared to abandon her so that they could have a better replacement to control. Hearing this angers Xingke who tries to go after them but only to be obstructed by Weinberg. Xingke tells him that it was his own country's business but, Weinberg doesn't stand down because he felt it was an international matter.

As the Black Knights continued to be bombarded with attacks, members of the Four Holy Swords Toudou, Chiba and Asahina were out in full force doing their best to keep the enemies at bay. C.C. too decides to go out in an Akatsuki. Zero tells her to make sure she escapes safely if the fight gets out of hand and C.C. smiles, confident that he will manage to do something before that happened. 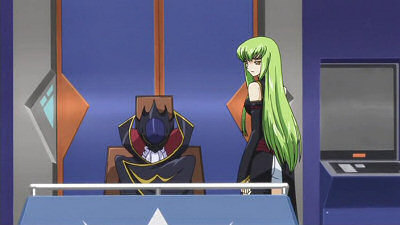 The second bombing squad was heading in. Toudou was managing to suppress them fairly well but the Knights of the Round too were starting to make their move, putting them at a great disadvantage. The Euniches wanted the renegade soldiers eliminated too and Xingke already had his hands full dealing with Weinberg.

Meanwhile, Nina aboard the Avalon wonders why they're not using the Mordred's Hadron Canon which would destroy the mausoleum instantly but, that would mean Britannia would get the blame for murdering the Tianzi. 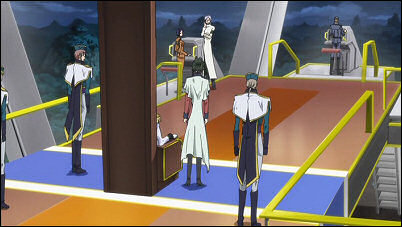 With the battle raging on, Zero was now contacting the Euniches attempting to negotiate a ceasefire but, unsurprisingly they weren't planning to do so even if it meant killing the Tianzi. The Euniches considered themselves as Britannians now and didn't care about their people.

Some of the shields aboard the Ikaruga were down now, leaving the deck exposed. Unable to withstand the conflict happening outside any more, the Tianzi rushes out onto the deck crying out, trying to stop the fight. However, this only made the Chinese forces focus their weapons on her. Seeing this, Xingke immediately rushes to her, getting his Shenhu damaged by Weinberg in the process. As he shields the Tianzi from the shots, he pleads to her to get away but the Tianzi refuses, wanting Xingke to stay by her side. 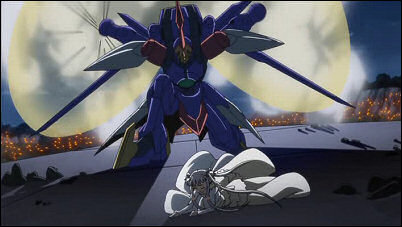 With the shots raging on, the Shenhu was starting to break down. Xingke begins to question his own abilities and wonders what he spent six years trying preparing to fulfill the Tianzi's wish. Desperately, he starts pleading for someone, anyone to save the Tianzi. In answer to his cries, Zero appears and manages to shield both him and Tianzi.

Out of the smoke appeared a new black coloured Knightmare Frame unit. Zero questions Britannia and the Chinese Federation whether they will continue their attacks and as if in answer, the Euniches give the order to fire. To their surprise, none of the shots could even dent the new Knightmare. Rakshata reveals it as the "Shinkirou (Mirage)" and claims its shields has the greatest defence power in the world. And as if that wasn't enough, Zero launches a prism towards the Chinese forces and fires a beam, deflecting off the prism and creating a powerful blast that destroys most of the units. At this point, Scheizenel can feel that Zero is up to something appearing at what appears to be the most convenient moment. 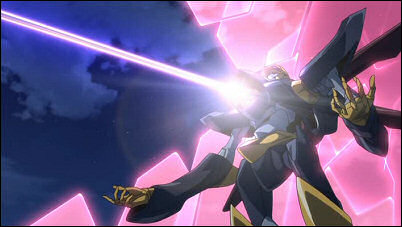 With Xingke by his side, Zero points out that Xingke has no choice but to team up with him. He claims that Xingke will make a good leader for the Chinese Federation and that was why he was saving him. Xingke questions if Zero can overturn the war with his Knightmare and Zero answers no but his well planned strategies will. As if on cue, a sudden number of reports are received about how a number of riots have risen all over China. The people have heard the conversation Zero had with the Euniches. It was all part of Zero's plan. 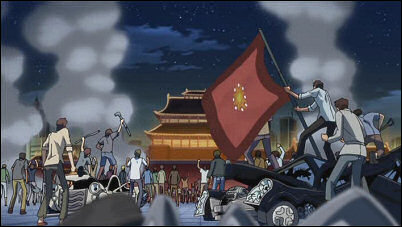 The situation was now turned for the Black Knights as they fought on. C.C. and Asahina rush into attack Anya but suddenly, C.C.'s Geass is activated. For a moment, she and Anya are caught off guard as a flash of memories cross between their minds. Chiba moves in, making use of this opportunity and manages to slash out at her Mordred, knocking it to the ground.

The Black Knights' ground troops were now pushing out in full force but even though Britannia had the edge, Schneizel decides to retreat because the Euniches had now lost the support of their people and could no longer represent the Chinese Federation. As his forces retreat, he wonders what his father would have done. 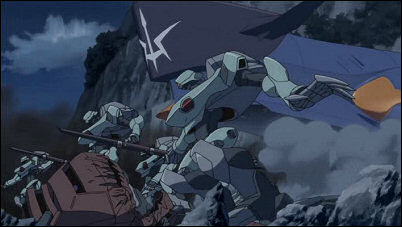 Both Xingke and Zero were now flying straight towards where the Euniches were. After Xingke executes the traitors quickly, Zero tries to find out where Kallen is but unfortunately Suzaku had already taken her away. Regretfully, he swears to rescue her once again.

It was now daylight and Xingke was being reunited with the Tianzi aboard the Ikaruga. During their happy reunion, Diethard suggests they make an announcment that the Tianzi's marriage wasn't completed and that perhaps they should marry her to a Japanese. Zero too considers it a good idea at first until Kaguya speaks up saying that it was more important to consider love. To Zero's surprise, C.C. also agrees with Kaguya's idea and Asahina backs them up while Laksharta laughs. Just as Zero was stuck in an awkward situation, Tamaki interrupts giving him a convenient excuse to leave the little dispute. 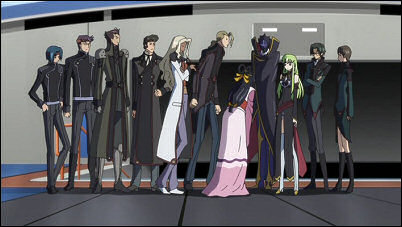 As Zero walks away with Tamaki, he wonders why C.C. was against Diethard's idea too when all he had to do was us his Geass on Xingke to arrange the next marriage. As Zero listens to Tamaki rambling on about gaining a title again, his phone rings.

It was Shirley. She was wondering about how to organise Milly's graduation ceremony. Zero answers it might be best if they actually ask Milly about it and then takes the opportunity to see if Shirley knows how to break couples up. Shirley answers she doesn't and suddenly breaks into a rant about how love can give one power. This reminds Lelouch of how he became Zero to change the world into a peaceful place for his sister Nunnally. He realises that feelings have the power to help change the world and thanks Shirley, quickly hanging up the phone. 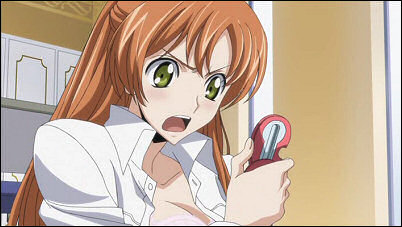 Returning to the deck, Zero decides to let the Tianzi decide her own future which surprises even Xingke. He explains that everything that has been done so far were backed up by the feelings and power in their hearts. Ougi agrees but Diethard has some trouble understanding. Walking up to Zero, Xingke extends his hand and to shake hands. 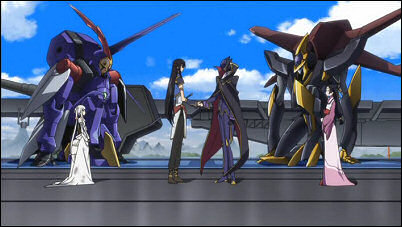 Back at Ashford Academy, Shirley was on her way to return some books on gardening when she comes across the disguised Sayoko. To bide some time for the secret entrance to close up, Sayoko grabs Shirley and kisses her.

In Zero's quarters, Lelouch was discussing his future plans with C.C. now understanding that she had wanted to see the power of the heart when she disagreed with the Tianzi's marriage. He says that he plans on returning to Area Eleven while leaving the Chinese Federation in Xingke and Toudou's hands. Now he just wants to concentrate on finding out more about the cult that was responsible for researching the power of the Geass. According to C.C., the location of the cult changes every time the leader changes and that leader now was V.V. He was most likely in China somewhere now and that was why Lelouch decided to occupy the land. By checking the usage of resources, he should be able to track down the exact location. He orders C.C. to stay behind and send him updates if she finds anything new. 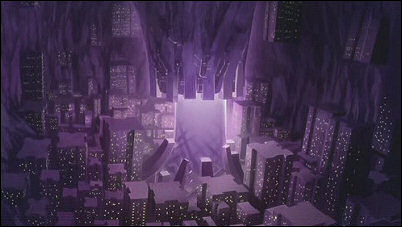 Soon Lelouch was back in Ashford Academy where Rollo was more than happy to see his "brother" back and learn that he'll be staying for some time, trying to think of a countermeasure for the Knights of the Round. Rollo suggests that he could always use his Vincent to join the fight but, Lelouch reminds Rollo that he doesn't want him to fight anymore. As they make their way back to the student council, Lelouch finds a very unhappy looking Shirley outside. Just as he approaches her to find out what's wrong, Anya and Weinberg appears before him. It appears the two Knights of the Round members wanted to experience what school life is like. 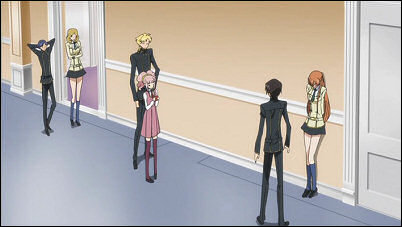 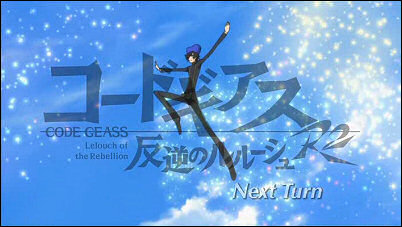 So, why is it that (almost) every time a character is trying to hide something in Anime and it's a guy, they always give the girl a surprise kiss? Would be interesting if it awakened Shirley's locked away memories. I can imagine it now... Every student being forced before Charlie the Emperor to get their memories re-written. Quite a scene.

Now I wonder what that scene between Anya and C.C. was about? Another little mystery just like that time C.C. came into contact with Suzaku back in season one.

Looks like the next episode will be another fun filled fanservice one. Milly trying to pair up people as part of her graduation ceremony's "Cupid Day".

Somehow I'm not as impressed with the show so far as I was back with the first season. 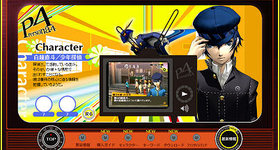 This week we see Naoto Shirogane's profile added to the P4 website. He is voiced by... 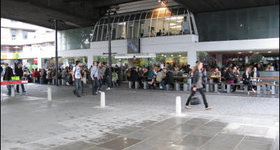 It's been quite a busy week so it took some time to finish this write up about the 5...

28 Jun 2008, 7:44:27 pm
It could be the fact that the break inbetween has caused a little bit of the intensity and rush to go away a bit for some people. I do think that the show has a few pacing issues (most likely due to Bandai wanting to string the series out as long as possible now that it's so popular and it's their first huge non gundam properity in a long while), but I'm sure Goro and staff will pull threw for us. They always do.