One of Shinkai's "5 Centimeters per Second" Draft Short Story, The Sky Outside the Window

An early post today since I already had this written up from last night. I decided to give the short story translation from yesterday a separate post because considering how long the post was, some people might end up missing this gem. I didn't like having it stuck in the centre.

This is one of the 10 short stories that Shinkai came up with while trying out ideas for his third movie and comes with the booklet in the Limited Edition DVD. In other words, this is what "5 Centimetres per Second" could have been.

The story is called "Mado no Soto no Sora (The Sky Outside the Window)". The character and story may not be the same as 5cm but the theme is supposed to match. Maybe you'll recognise it.

I think the scenario kind of matches Kanae in the second part of the movie, "Cosmonaut".

窓の外の空、The Sky Outside the Window

Miyuki Ogawa is a junior high school girl who lives in a high rise flat with her two parents. Due to a typhoon one morning in June, Miyuki decides not to go to school. Her parents soon leave the apartment to go to work. Left all alone in the living room, everything around Miyuki reminded her of the heavy rain outside. She began to imagine what it was like outside. The crowded train she usually took to get to school in the morning is probably filled with the same rainy atmosphere. Someone's soaked umbrella soaking someone's skirt and legs. Businessmen cramped together with their clothes smelling of insecticide. And the air conditioner that's turned on too high, making all the damp clothes even colder...

After having only a yogurt that morning for breakfast, Miyuki returns to her room to resume her work. She was writing a novel that she hasn't told anyone about. It wasn't complete yet and even if she did finish it, Miyuki didn't know what she was going to do with it. Miyuki stretched a little and began manicuring her nails. "I probably want to leave a trace of myself behind in this world."

Miyuki soon noticed the wind had picked up outside her window as it howled through the gaps between buildings and sirens could be heard. Pressing her ear towards the window she could hear the trees violently waving in the wind, trucks running through water and a sign being thrown onto the ground.

Scenes of the raging rain outside made their way into Miyuki's mind again. Roofs exposed to the roaring typhoon winds, the rusted cable cars, the empty crossings, the deserted buildings, creaking lights and her classmates taking lessons quietly in class...

Staring at the white notepad before her, Miyuki thought about the possible future ahead of her. She'll be taking her final exams, wearing a new uniform and if it all goes well, she'll attending a private senior high school that only takes 40 minutes to get to by train and she will probably join the basketball club again. She'll be working part-time and maybe go out with a few boys. "After graduating from high school, I'll go to university," thought Miyuki.

"Hmmm, university life... After that it'll be a career and marriage, something that I can't really imagine. In any case, the novel I'm writing now shouldn't have any effect on my future. But then what am I writing this for?"

"...No, my novel has nothing to do with all that," thought Miyuki. "There's nothing I want to be just now. I haven't done things I want to do yet. First I'm going to write this novel because I want to know more about myself. I'm sure there will be a world that I'll be able to reach out to afterwards."

Miyuki noticed the wind had stopped now. Silence hung peacefully in her room. Looking up she could see how bright outside suddenly was. Rays of sunlight were bursting through the clouds... Opening the window, the sound of Miyuki's sandals echoed as she stepped out onto the veranda. And what a world that laid before her eyes!

Just moments ago the town was drenched in rain but now, it was glowing brightly as it reflected the dazzling rays of sunlight. The clouds above were breaking up and dashes of the blue sky could be seen. Small black clouds were being whisked quickly away by the strong winds overhead in the sky.

"It's the first time I've seen anything like this. Yes, this must be the eye of the storm..."

Looking at the sky from the high veranda, Miyuki thought the blue colour was a sad one. It was so far away and so high. Even though she knew she couldn't reach out to touch it, Miyuki stretched out her hands. She didn't know why but, under that powerful moment of time, she broke down in tears.

It was a bright sunny morning the next day. Miyuki was taking a side lane in between buildings as she made her way to the station. Stopping, she turns round to see the town hidden away by the blue sky. "I won't be able to tell anyone about what I saw yesterday probably," thought Miyuki. "It's impossible for me to leave any traces of my life behind in this big world. I don't know why but it's been bothering me for a long time..."

"So yet why do I continue writing my story?" Miyuki looked away from the sky and continued to walk again. 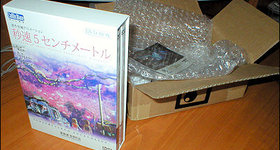 Yes, after watching a downloaded copy I liked the movie so much I decided to shell out...

Famitsu made a detailed comparison between the original PSP and the upcoming...

When people are going about their daily lives, I think most are either too busy or just don't stop to think about what they're doing and that's why such emotions go unnoticed. On the other hand, when you're standing in a third person point of view, like how you're reading this story about Miyuki, then you're more likely to notice and realise.

Just like 5cm, this can be a fairly thought provoking story with the reader in a third person view, even though it appears so simple on the surface.

I don't know if it's simply how simple what Shinkai refers to that makes it unnoticable when you experience it, but different when it's in a story like this. I mean, we all know of the futility of leaving behind evidence of your life, unless you've made some really big impact the people who'll know who you are are your descendants and maybe the descendants of the friends you have, and if you have works... someone who appreciates them... however many of them there are, but yet we do it anyway.

If I had to put my finger on something it's that the simplicity of such a complex emotion is what makes this story so powerful.