So, Atlus' classic dungeon crawling RPG "Sekaiju no Meikyuu" has finally reached Western shores on Tuesday as "Etrian Odyssey". While I was trailing through my usual list of gaming news sites, I came across this hilarious fanmade IOSYS video about the FOEs in the game! You'll have to have played the game to understand the joke! 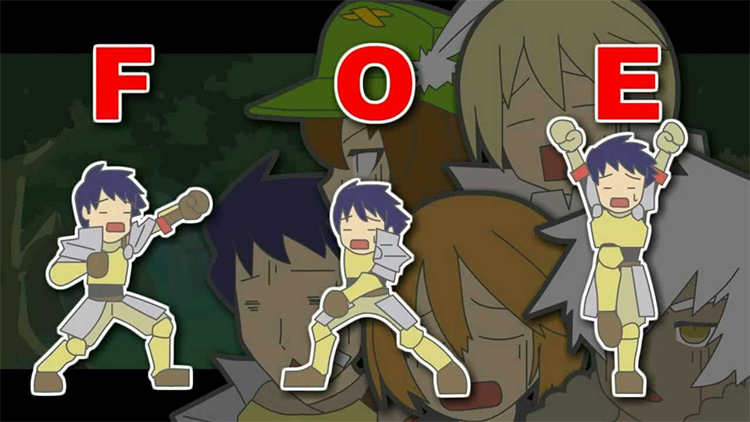 It's actually a PV for Iosys' fanfic "Sekaiju no Omocha Hako" soundtrack CD. There's quite a lot of copies of the video on Youtube but you can view the original quality Flash version here. Those of you who know about 2ch will recognise the ASCII art influence.

The Encounter with an F.O.E.

"What is going on here?! My party got wiped because of an FOE!"

The numbers are increasing, these FOEs.
I made a mistake navigating, there's an FOE.
They're reviving, those FOEs!
I forgot to buy some Warp Strings, there's an FOE!

There's a horn sticking out, it's an FOE.
Ouch, that curse really hurts, it's an FOE.
I open a door and there's an FOE!
Every 3 days I meet an FOE!
"Onii-chan! Get away, that's an FOE!"
Big bro and I are going to go body building!

"Hahahaha! I've added another monster to my encounter list!"
"And it's none other than an FOE."

Brilliant stuff! Yes, those FOEs can be annoying sometimes. Especially when they're near a boss or you happened to run into a random battle while near one of them.

And if you're interested, there's quite a number of references in the music video.

"Eirin (えーりん)" refers to one of IOSYS' older songs, "Help me! ERINNNNNN!". You can find a music video of it on Youtube but, it's not as interesting. It's completely made up of 2ch ASCII art and shows someone doing the "Eirin" sign to call for help. The voodoo doll refers to IOSYS' "Marisa Stole my Previous Thing!" PV for their "Touhou Otome Bayashi" album. Both this and "Eirin" are a reference to characters from the Touhou Project series of PC side shooting games.

"Big Bro" is a reference to the "Chou Aniki" game series (which is very gay looking).

Or, known in Japan as "Zelda no Densetsu: Mugen no Sunadokei". The story kicks off...

And the event quest for today was "The Trap that Lurks in the Volcanic Regions...